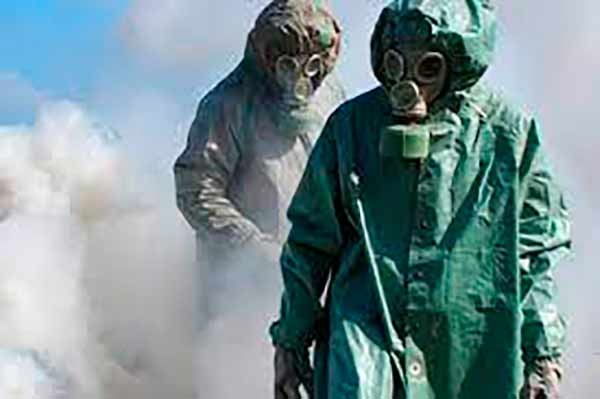 Syrian activists have denounced the use of chemical weapons in an intense bombardment in rebel-held areas around the capital, Damascus. An attack that, precisely, takes place when a UN mission has entered the country to investigate the possible use of this type of weapon and whose movements are being restricted by the Bashar Asad regime.

In fact, while organizations such as the Arab League have demanded that this United Nations team “immediately” approach the affected area, one of its members, the Swedish scientist Ake Sellstrom, acknowledged that he had seen the images of the victims on the television and that “it seemed like it would have to be investigated.

(New York) – Available evidence persuasively suggests that Syrian government forces were responsible for chemical weapons attacks in two Damascus suburbs on August 21, 2013, Human Rights Watch said in a report released today. These attacks, which killed hundreds of civilians, including many children, appear to have been carried out with a military-grade nerve gas, most likely sarin gas.

The Syrian National Coalition (CNFROS) denounces that at least 1,300 people have died in the attack. The use of chemical agents could not be verified immediately, as reported by Reuters, although the images and videos that circulate are convincing.

In various videos and photographs distributed by human rights associations, dozens of corpses are seen on the floor of various rooms, many of them are children and some are months old babies.

Activists from a popular local coordination committee have reported that dozens of bodies have been taken to a field hospital in Kafr Batna, a neighborhood a few kilometers from Damascus, in a rebel zone east of the Syrian capital.

The 22-page report, “Attacks on Ghouta: Analysis of Alleged Use of Chemical Weapons in Syria,” documents two apparent chemical weapons attacks on suburbs to the east and western Ghouta that are under the control of opposition forces, 16 kilometers away from each other, during the early hours of August 21. Human Rights Watch analyzed witness statements about the projectile attacks, information related to the possible origin of the attacks, the physical remains of the weapons systems used, and the medical symptoms of the victims, as documented by medical personnel.

The regime denies the use of chemical weapons

The Syrian regime has issued a statement after the attack denying the use of chemical weapons and has assured that the information is false and that they only intend to divert the attention of the UN team of experts visiting the country.

For its part, the Syrian Observatory for Human Rights has said that dozens of people, including children, were killed in the fierce bombardment. The CNFROS has denounced that the Damascus regime restricts the movements of the UN mission in charge of investigating the possible use of chemical weapons in the country, which will affect the result of its study.

In a statement, the main opposition group has asked the group of experts, who arrived in Damascus two days ago, to visit all the places where Bashar Asad’s regime would have used this type of weapon, especially in controlled areas. by the rebels.